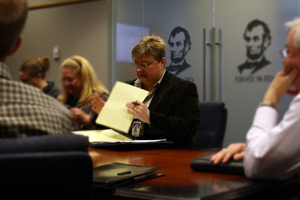 To afford Lincoln community members with the same access to fair and equitable treatment that state residents receive from the Nebraska Office of Public Counsel/Ombudsman, the position of Ombudsman within Lincoln City government was established in 1999 by Mayor Don Wesely.

The City Ombudsman is an Executive Ombudsman, situated in the Mayor's office of municipal government. The Ombudsman's mandate is to be an impartial reviewer of facts. The position was established by policy in 1999 and was ensconced by the City Council as a unique personnel classification in 2003. The Ombudsman's objective is to ensure that constituents' receive fair, equitable treatment by all departments of City government.

To the greatest extent practicable by an Executive Ombudsman, the organizational ombudsman structure set forth by the American Bar Association for the Establishment and Operation of Ombuds Offices is implemented by the Ombudsman.

The users of the Ombudsman's services encompass all residents of Lincoln, Nebraska, departments of City government and members of Lincoln City Council. The Ombudsman also collaborates with other governmental agencies, elected officials and nonprofit agencies' staff who provide constituent referrals to the Ombudsman. These relationships are of necessity reciprocal and the entities described function as both clients and referral resources for complaints outside the Ombudsman's jurisdiction.

Ombudsman services are delivered by a variety of mechanisms due to varying degrees of client literacy, access to technology, lack of understanding of government and/or laws. The UPLNK app is a primary point of inquiry and service delivery as well as telephone contact either through the Mayor's office or the Neighborhood Hotline, face to face and email contact.

The City of Lincoln strives to efficiently carry out municipal government functions to create a safe, clean environment that is conducive to economic vitality and a high quality of life for all residents.

In working towards that goal, the Ombudsman will assist in providing government accountability and transparency to constituents on departmental actions regarding their concerns. The Ombudsman will facilitate public education on the use of public resources to meet the priorities identified in the City's outcome based budgeting plan and defend those resources for the common good. By helping to create a good stream of communication within and between departments to provide all constituents with reliable, timely responses, the Ombudsman will assist the City to increase the level of public trust and maintain the stable, fair provision of City services.