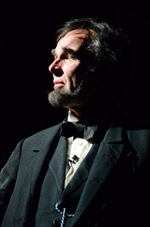 Klein performed at the 2002, 2004 and 2005 City celebrations. He has performed as President Lincoln in 38 states and internationally, and has been featured on National Geographic Television, Discovery Channel, History Channel, Smithsonian Channel and C-SPAN. He was in History's Channel's "Only in America with Larry the Cable Guy" last August. Klein has also appeared in the New York Times and USA Today. His website is lincolninstitute.com.

The event will also feature two showings of "Intrepid," a new 30-minute film about President Lincoln's Civil War Balloon Corps and its Chief Aeronaut, Thaddeus Lowe. Terry Lowe, a City employee and member of the celebration committee, is a descendant of Thaddeus Lowe and will display his collection of items related to this historic effort.

The free celebration is presented by the City of Lincoln with support from the Humanities Nebraska and local businesses, organizations and individuals. Music for dancing will be provided by the Smith Family Band of Hastings and local favorite Chris Sayre, who has performed at every City Abraham Lincoln Birthday Celebration. The doors open at noon, and the schedule for the day includes the following:

Exhibitors will include Susan Dittman of Lincoln, author of "Abraham Lincoln's Shining Star - the Inspiring Story of Abraham Lincoln and Nebraska." Area Civil War re-enactors in authentic uniforms will mingle with the crowd and answer questions.